An unfailing and almost maintenance free folding door allowing even bigger machines to enter or exit a warehouse.

Nykarlebud, a courier and transporting firm in a west coast city in Finland, had a concrete building built to serve as a warehouse and loading facility. The new building needed functional, easy to use doors that would allow even the bigger motor vehicles easy entry. One of the firm’s drivers, Sebastian Isaksson, had gotten a tip from one of his friends about the FinDoor doors, and Sebastian went to take a look at these. Their high quality, plus the manufacturer’s customer service were the convincing factors in making them the choice for Nykarlebud.

”The FinDoor rep arrived quickly at the site to take the measurements. Then we agreed on the price, agreed on the deal, and the doors were installed a couple of weeks later. The installation of three doors took six hours. The installers got here in the morning and by evening the doors were in place and functioning. Even so, FinDoor phoned after that had been done to ask if we were satisfied and if we wanted any alterations done on the doors. Everything happened so easily. Now we don’t have to stretch way up to reach a handle and we can open only one half of the door when that is sufficient for our needs. Thus we don’t lose all the heat inside during the wintertime.” 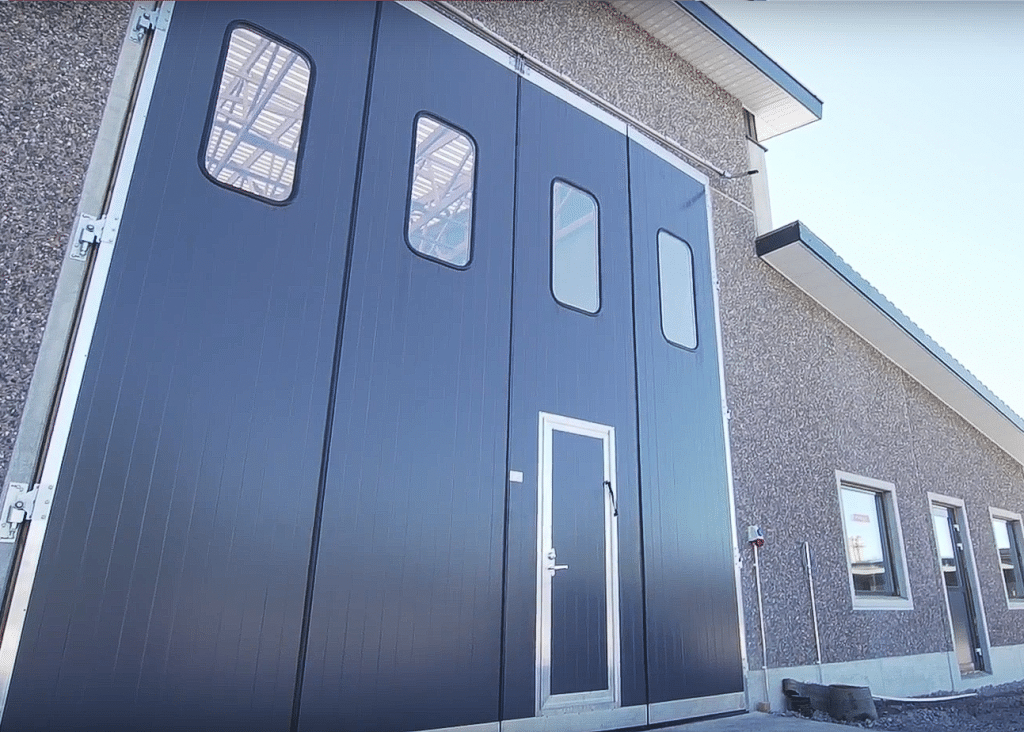 FinDoor is Canada’s biggest manufacturer of folding doors. Our own installers install the doors and make sure that they work trouble-free. In this way you can get guaranteed quality from FinDoor, designed to withstand use in Canadian working environments.

The energy efficient folding doors withstand hard, demanding workspace conditions. They are secure, easy to use and assuredly functional, and their thermal efficiency and weather tight qualities are among the best in the marketplace. We develop on our products continually so that they will meet our customers’ needs even better.

We actively phone our customers so that we can become thoroughly familiar with all of the demands on the doors. We tailor the performance and the appearance of the door per your wishes and we deliver and install the doors promptly and flexibly per your schedule. This way you can get the precisely fitting and operating door on schedule.

The get the job done attitude

We value an honest and straightforward approach to doing our work. We firmly stand behind the quality of our products and we gladly take any feedback. We come to every job – even those difficult ones – eagerly. We fully guarantee our products. That is why all of our doors have our phone number on them – so that you can easily contact us in all cases.

Folding doors, which open sideways, have been designed to withstand tough demanding use and variable weather conditions without adversely impacting the surety of operation. You can also get the folding door equipped with opening machinery as well as with windows or completely glazed. This is an excellent choice of door for example barns, fire stations, shops or carwashes.

Get fire doors meeting the fire resistance classification criteria that you need at your installation. The models we offer are certified by the VTT Technical Research Laboratories. Folding doors are available with a fire resistance rating of EI30, the hinged and sliding doors all the way up to EI120. It is possible to also install door opening machinery with the fire doors!

Are you looking for a weathertight, easy to use and durable entry door or double door, which will be easy to open even in the wintertime? Findoor’s dependable hinge-mounted doors are exceptionally suitable for the challenging conditions posed by, for example, agriculture or industry.

A sliding door is a good choice at, for example, smaller workspace enclosing buildings that have plenty of wall distance on either side of the doorway. It is easy to use a lightweight sliding door that is built of the same durable, high quality materials as are the Findoor folding doors.